Our visit to the coast in January was clearly separated into two parts: the traveling and the ocean.

We started our trip over the pass, basking in the glories of giant evergreens heavy with snow.

I would be lying if I said we didn’t break into a Christmas song or two along the way.  The roads were clear and the traffic light.  The trees, however, were putting on a winter show we don’t often experience. 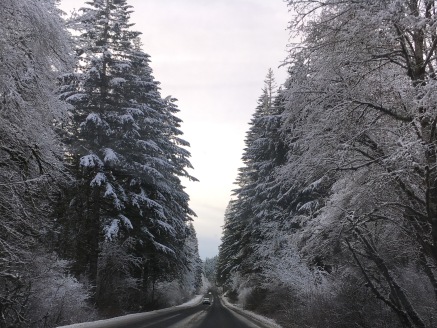 The second part of our trip began as we sat before our glass windows and soaked up the view.  Once at the ocean, the temperature was less snow-like, although it was “frigid” for the coast (the locals told us).

There were three surfers beyond the waves, not wanting to tear themselves away from their fun at sunset.  A seal, much closer to shore kept an eye on these three.  I wonder if it was thinking,  “Food, foe, or friend?”  It was a most curious seal and stayed out as long as the surfers.

Saturday was the real show.  Ten surfers marched out to sea, at different spots along sand, to surf, sit, and play in the waves.  I wondered if it was a convention of sorts.  That seal showed up again, swimming back and forth, its little head peaking out to watch the surfers with me.  After a couple of hours, the surfers further out were greeted by a pod of seven seals, swimming, dipping, jumping, and rolling around some of the surfers.  What a joy to watch!

Robert went out for a long walk, and sure enough…that curious seal popped up to check him out.  Made me wonder if we go to the coast to look at sea life and they come to watch US?

What a joy, this “year at the coast” one weekend a month.  Goodbye January ocean.  See you next month.